It’s too easy to stick to what you know, and we’ve found in particular that we go to the same stretches of coastline time after time. While it’s nice to know the Portreath – St Agnes cliffs like the back of your hand, there is so, so much to Cornwall that we have yet to explore. So we decided this weekend to have a Proper Day Out to the Roseland, an area of the county that neither of us had really been to before. Surrounded by water with incredible views of the Fal River to the west and the Atlantic to the east, we found so much to explore on our mini road trip.

Although the peninsula is only 20 miles or so from home, and doesn’t cover a huge area, the multitude of tributaries from the Fal mean that driving anywhere takes longer than you’d expect as you wind through country lanes and over fords, through woods with tantalising glimpses of the coastlines around you.  Firstly we headed to Portscatho, a tiny village with a beach that was small on sand but with masses of rockpools to explore. We didn’t see anything other than anenomes sadly, but enjoyed having the beach to ourselves on a beautifully crisp January day. I practised my cartwheels while Paul looked on and kindly filmed my elegant gymnastics in slo-mo on his fancy new phone…(I’m assured these will not be making their way onto the world wide web). Tatams was a welcome discovery; we warmed our hands with a much needed coffee and custard tart before heading back to the car. Top tip: there’s a free car park (and toilets!) in the middle of the village, though I dread to think how busy it gets in peak season… 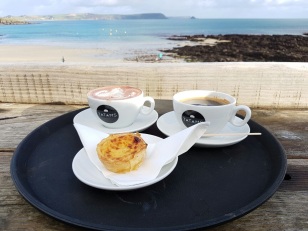 From there we hopped back in the car and had a quick look in the National Trust guidebook to see what else was nearby. St Antony Head is at the southermost point of the peninsula and has beautiful views across the river towards Falmouth and Pendennis Castle, to St Mawes on the eastern side.  From the NT carpark, we followed a path down towards the lighthouse, and along the coast towards an old shelter, where a telescope stands, perfectly positioned to spot any incoming marauders. St Antony was an important military defense site for centuries and had armament in place until as late as 1957, so there’s lots to see if you’re a history buff.  Further along the path, we approached a bird hide, and were lucky enough to spot a peregrine falcon nesting in the cliff opposite! After a while watching and waiting for its partner to return, we moved on and back to the main path to look around the rest of the old military buildings before heading off, on the search for some lunch.

Another twenty or so minutes later and we arrived in St Mawes. By this time the chill was really setting in and the blue sky becoming slightly marred by clouds, so the streets were quiet and the waterfront empty. But! Very excitingly, as we strolled along the coastal path up past the castle, past some seriously beautiful two-million-pound houses,  who did we exchange a nod of the head with but none other than Simon Callow CBE, legend of stage and screen. It was slightly surreal and gave us a giggle as we did the whole, “was that..?” “it was, wasn’t it?!” “well, fancy that!”  and then ended up in the awkward predicament of following him back into the village where we lost him as he stopped off in a cafe. Celeb stalking aside, we were slightly underwhelmed with St Mawes but perhaps it warrants a return visit in warmer weather, and when we’re not on so tight a budget, so we can get out on the water and enjoy a lazy lunch outside one of the hotels.

The final stop on our itinerary was St Just in Roseland (not to be confused with St Just nr. Land’s End), to see the incredibly pretty and historic church. Where else can you see a 13th century church surrounded by palm trees and subtropical gardens? I’d love to go to a service there one day. We didn’t go inside this time, but spent some time wandering around the gardens and graveyard, watching the tide come slowly up the creek. By this time the sun was starting to set, so it was a short drive to the King Harry and across the river towards home.

Cornwall in winter is such a different place and there’s nothing better on a crisp, clear day than getting outside, to feel the gentle rays of the sun stretching down and reaching your skin. A reminder of the glorious days of summer and early autumn and a promise of the longer spring days soon to arrive. Patches of daffodils are already peeking out and soon the towns and beaches will be full again. But for these few months, it’s all ours.

aspiring. to what, we're not quite sure yet. View all posts by Rachael

This site uses Akismet to reduce spam. Learn how your comment data is processed.