When you live a million (or 350) miles away from most of your friends, you seize any chance possible to see them. That’s how we ended up spending Sunday afternoon in Plymouth, meeting friends who were camping not too far away.

Unfortunately, our plans to watch the Wimbledon final on the big screen were scuppered by the weather, so instead we wandered down to the marina and spent a couple of hours at the National Marine Aquarium, which is apparently the largest in the UK. It’s not cheap, at £14.95 for adults, but if you gift-aid your ticket then you can get entry for a year, and you certainly see where the money goes as you explore the exhibits.

Without spoiling anyone’s future visit, I can say that as four adults we were more than entertained and amazed by everything on display, and in particular enjoyed hearing the story about how an epileptic turtle came to be living in Plymouth.   My only disappointment was the amount of plastic tat for sale in the gift shop, which jarred slightly after just coming out of an exhibit about the ecological damage of plastic! We spent around two hours there and I’m sure with littler people you could stretch it out for much longer, making it a great choice for a wet, grey day.

Amazingly enough, as we left the aquarium on the hunt for tea and cake, there were dolphins swimming in the harbour! Such a lovely treat, and very appropriate. Unfortunately they were rather camera-shy, but here are a few images I took on my phone throughout the day. 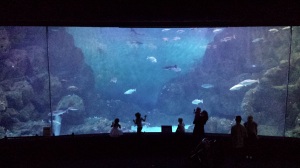 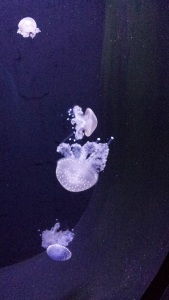 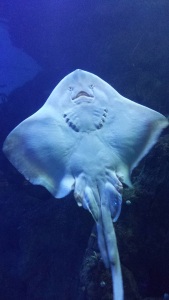 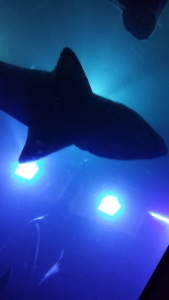 aspiring. to what, we're not quite sure yet. View all posts by Rachael

This site uses Akismet to reduce spam. Learn how your comment data is processed.